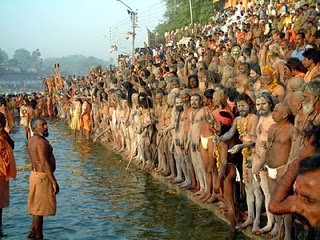 Gangasagar Mela is the yearly assembly of Hindus for the duration of Makar Sankranti in Magh Month (January) at Sagar Island / Sagardwip in West Bengal. Gangasagar Mela 2016 date is January 16. The Mela will commence on January 12 and ends on January 16, 2016. Hindu pilgrims turn up in thousands from corner to corner of the country and from other parts of the world to take holy dip in the sacred waters of River Ganga at the confluence of Ganga with Bay of Bengal.

The Mela is generally a three day event. Hindu devotees take dip at the auspicious time on Makar Sankranti day and tender prayers to Lord Surya / sun god. After the dip, devotees proffer water to Surya and it is supposed that this rinse the sins away. After the rituals, pilgrims visit the Kapilmuni Temple located close by.