Things to see / do in Elephanta Caves , Mumbai


The splendid rock cut temple complex devoted to Lord Shiva, was possibly excavated for the period of the 8th century by the Rashtrakuta Dynasty which ruled the region from 757 to 973 AD. Shape of a basalt rock face, the cave complex cover up an area of nearly 60,000 square feet and has a compilation of numerous subsidiary shrines, courtyards, halls and porticos set in a splendid and accurate mathematical symmetry filled with delicate stone sculptures of Hindu Gods and Goddesses. Stylistically, the carvings in these caves mingle the elegant forms of South Indian Hindu sculpture with the precision and composure of Buddhist Gupta Arts. Nevertheless extensive damage have been caused to the sculptures by the Portuguese, they are still outstanding. 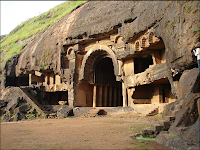 The most significant amongst the caves is Cave One on the Western Hill. The main sculpture region of this hefty multi column hall is on the southern wall at the reverse. Stairs lead to the key entrance on the north of the cave complex with three opening hold up by 28 decorative pillars, every one resting on a square base with fluted shafts. Eight of the pillars have been damaged or has been distorted. Facing the north entrance there is a vast demonstration of Lord Siva as Lord of the Universe / Mahesvara murthy / Trimurthy on the south wall at the reverse of the cave. The 6 m lofty idol is a superb one, considered to be a masterwork of Indian art. The three faces symbolize three aspects of Shiva, as the creator (on the right), the preserver (in the center), and the destroyer (on the left). The square linga shrine or the chief shrine is at the western end of the main hall in particular axis with the east opening. Dwarapalas / doorkeepers safeguard each of its four doors initially accompanied by assistant dwarfs / gana which are mainly missing nowadays. The dwarpalas can be traced back to the traditions of Buddhist Gupta arts. There is one more shrine on the east with sculptures of dwarapalas and lions protecting it.