Sheesh mahal mirror work The entry of the fort is through the Dil-e-Aaram Garden, laid out in the traditional Mughal style. An impressive flight of stairs leads to the Diwan-E-Am / hall of public audience which has latticed galleries and double row of columns apiece having a capital in the shape of elephants on the apex. To the right are steps that lead to the little Kali Temple. Maharaja Man Singh was a big devotee of Goddess Kali and prayed to the goddess for victory through battles. The temple has gigantic doors made of silver. The larger white marble Shila Mata temple has the image of Goddess Kali, brought by Raja Man Singh from Jessore in East Bengal / Bangladesh. 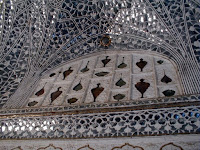 The emperors apartments is located on a higher terrace away from a two tiered decorative gateway, Ganesh Pol, covered with graceful frescoes and pavilions having captivating jali (Lattice worked) screens. The Jai Mandir / hall of victory has a sparkling ceiling with mirror pieces on stucco and well-designed inlaid panels. The Diwan- E- Khas, hall of private audience is alike in ornamentation to Jai Mandir and the 'Seesh Mahal' / hall of Mirrors known for its craftsmanship in mirrors, is the most amazing of the lot. Thousands of mirror pieces ornament the walls and the ceiling that, any streak of light makes them glisten and illuminates the whole room. In front of the Jai Mandir is the Sukh Niwas / hall of pleasure with a door made of sandalwood, inlaid with ivory with a channel running all the way through, which previously carried cool water acting as an air cooler.

The zenana or the women's apartments and frescoes which depict Krishna Leela scenes enclose a spectacular courtyard. There are private chambers from where the royal women could watch the events of the royal court in privacy. The well proportioned garden, Kesar Kyari in the hub of Maotha lake and the Dilaram Bagh at its north end provide a magnificent view of the palaces.