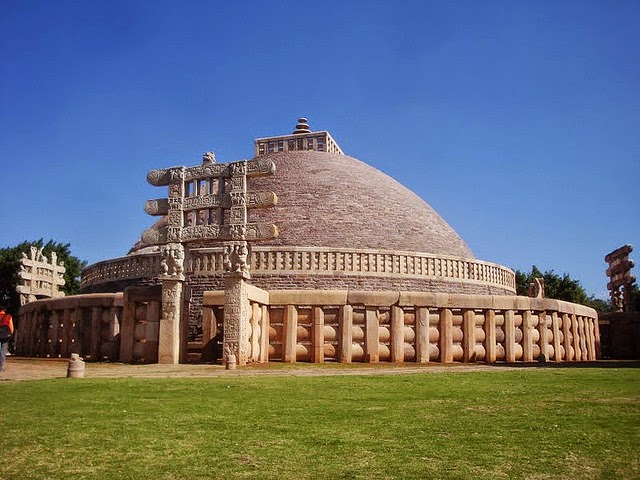 Sanchi, a major Buddhist hilltop complex  located 46 km north east of Bhopal, and 10 km from Besnagar or Vidisha in the central part of the state of Madhya Pradesh, is famous for its group of stupas, monasteries, temples and pillars.


Dating from the 3rd century BC to the12th century AD, these are the best preserved and most studied Buddhist sites in India.

Designated by the UNESCO as a World Heritage site for its archaeological and historical importance, it was Ashoka, the Great Maurya Emperor who built the first stupa and a monolithic pillar (3rd century BC ) here. A great number of stupas and other structures such as railings, elaborately carved gateways, Buddha images etc were added over the succeeding centuries.

The great stupa also called Sanchi Stupa1 is the most famous of the stupa's in Sanchi. The majestic stupa, 36.5 mts in diameter and 16.4 mts high, with its massive hemispherical dome is one of the oldest stone structures in India. Originally built by the Mauryan Emperor Ashoka, the whole structure was rebuilt in its present larger form, in the middle of the 2nd century BC. The original brick stupa was enclosed within a stone encasing in the 3rd century BC.